Art is a very fascinating, mysterious and wonderful universe of creativity and subjectivity. I’m always curious to know what the artists are thinking and feeling while they are sliding their paint brushes across the canvas.

An event took place called Lahore Biennale, the first edition, from 18th-31st March which was an exhibition that celebrated art. It took place at different places across Lahore, such as Lawrence Garden, Mubarak Haveli, Alhambra Art Gallery and Lahore Fort. I was able to go to the exhibition at Lahore Fort.

The exhibition was at two places, Maktub and Summer Palace. At the Maktub, young aspiring artists sat and did miniature paintings out in the open. People could pass by, observe and question the techniques used.

The artists crush natural gemstones such as lapis lazuli, mix it with the white powder shown above and a bit of water to make their paints. And yes, the seashells are the palette to maintain the techniques used many years ago. 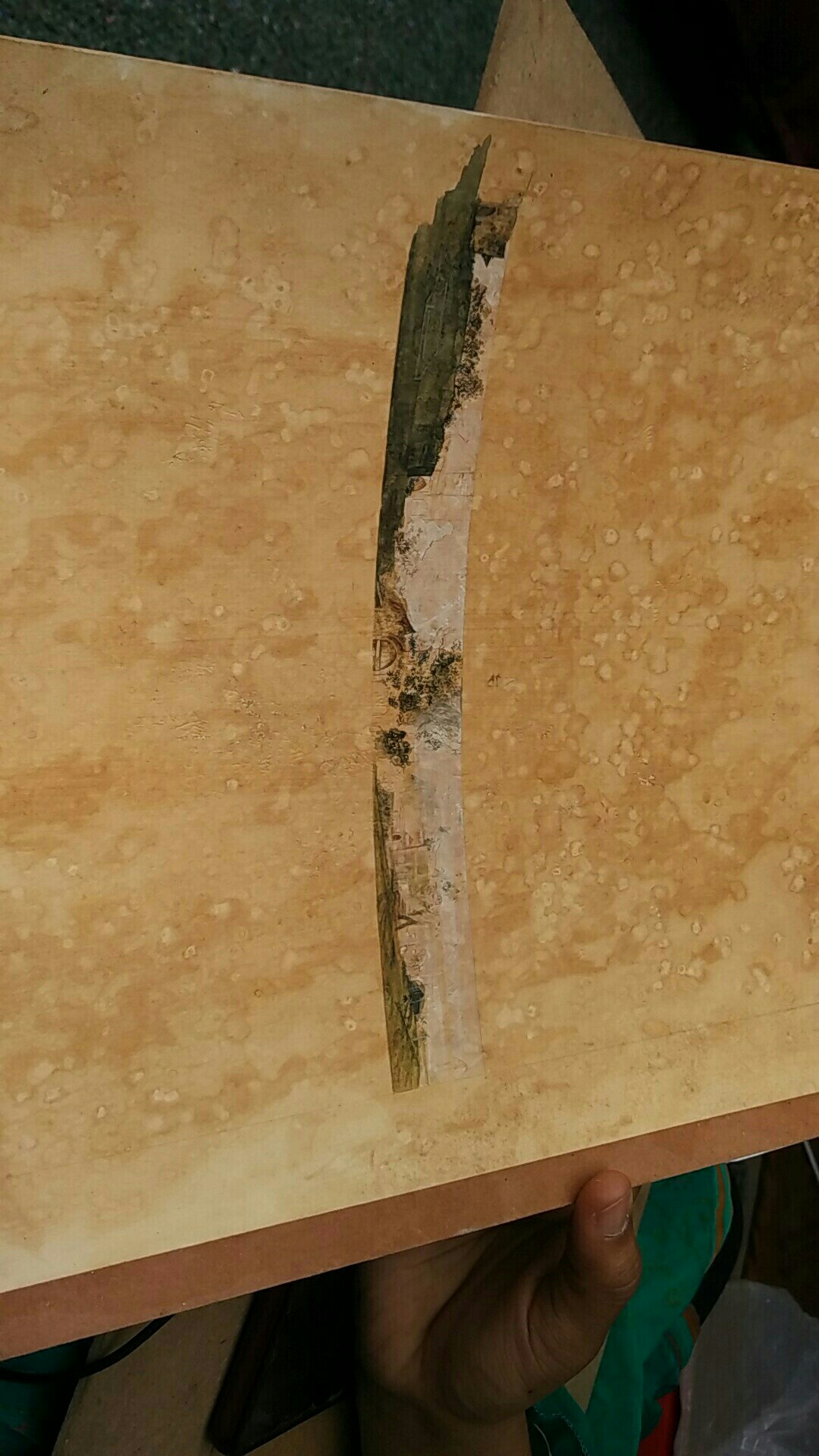 This was a large piece of paper with a thin strip of a very detailed panoramic view of a scene of Lahore Fort. 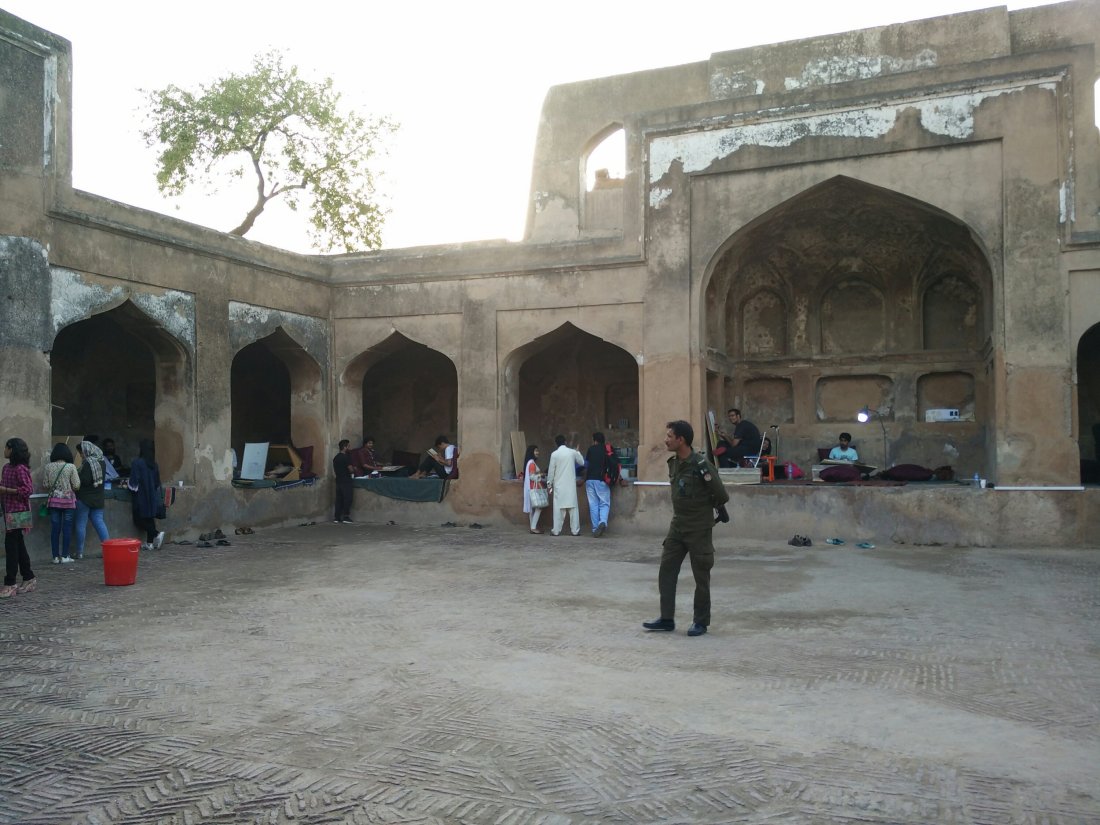 Above is the Maktab where you can see painters, mostly National College of Arts students and graduates. 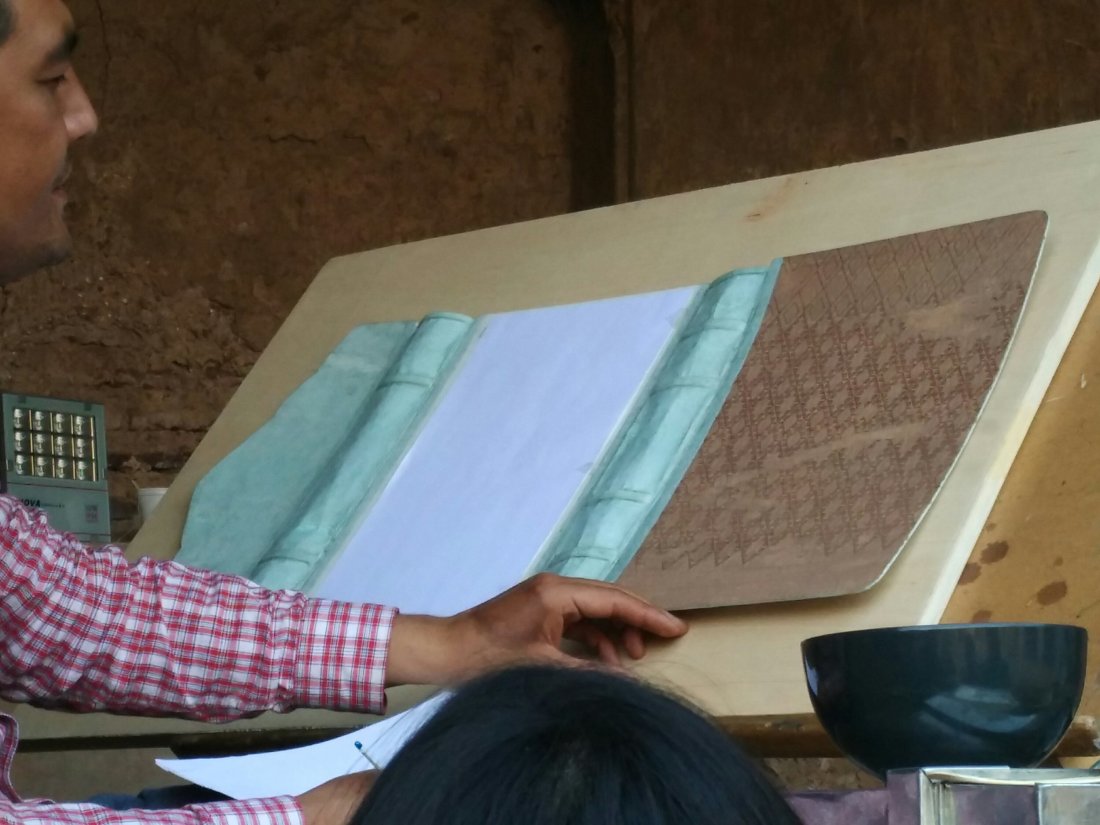 Above here is another scene of the Fort and the artist aims to put another picture at the hole to give it more depth.

Above here, the artist wanted to educate people that miniature work doesn’t mean ‘tiny’ work. It involves the techniques and detailing involved to give the picture a lot of depth while keeping it two-dimensional. This artist always wanted to show the position of ‘now’ which is modern while other artists were painting scenes of the past, like Mughal scenes. He painted the scene of ‘now’ literally by drawing a scene of the people at Maktub.

The above painting was in progress and made by a Changezi woman. She wanted to express the pain, torture and misery Changezis go through. In Quetta, they undergo severe torture, stripped off of everything they own and lose family members almost everyday due to tribal conflict. Many Changezis flee to other cities like Lahore to be safe and to earn employment but they are given very little chances of employment due to harsh discrimination against them. The government hasn’t made much effort in supporting and protecting these people. She said that sometimes they have to lie if someone asks if they are Changezi. So they are living a two-faced life and are stripped off their personality. Thus above shows people with blank faces trapped in a cage of violence and misery. The painter herself had gone through difficult times. Her father killed himself before they could get him due to the severe depression he was in. 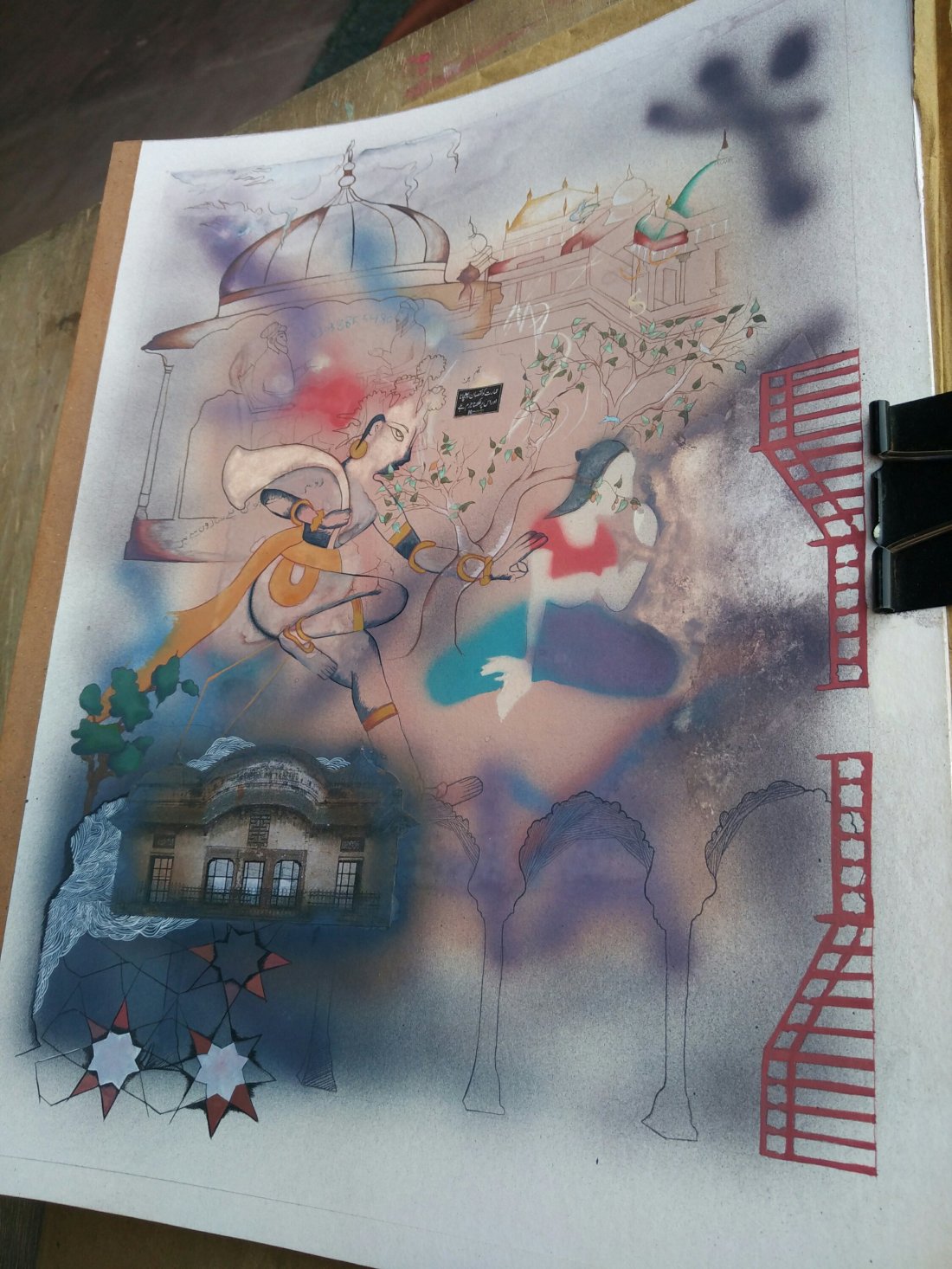 The Summer Palace is not open to the public, except for exhibitions. My family and I tried to go there but we would always be late. I live about an hour away from Lahore Fort in the ‘modern’ Lahore rather than Old Lahore where the Lahore Fort, Badshahi Masjid and Food Street are, yet we came three times to try to make it in time.

Above here is a charsuti cloth where the butterflies are made of human hair.

Above are old specimens of miniature work.

Above here are handmade wedding cards. I took a bad angle of this picture but if you allow the light to pass through the cards, you can see the detail of contrast of dark and white within the card, showing how it was moulded and shaped yet it is flat with a design of holes on it.

Above here, an illusion is being shown. These green objects, used at parties usually are placed in a random pattern together. Initially while looking at this, I saw no point in this as it was just a lot of party objects scattered across the floor. But then I realized it was an illusion, creating a large ‘field’ with a large mirror in front at the first pathway you see in the foreground.

Description of the tiger paws mentioned above. 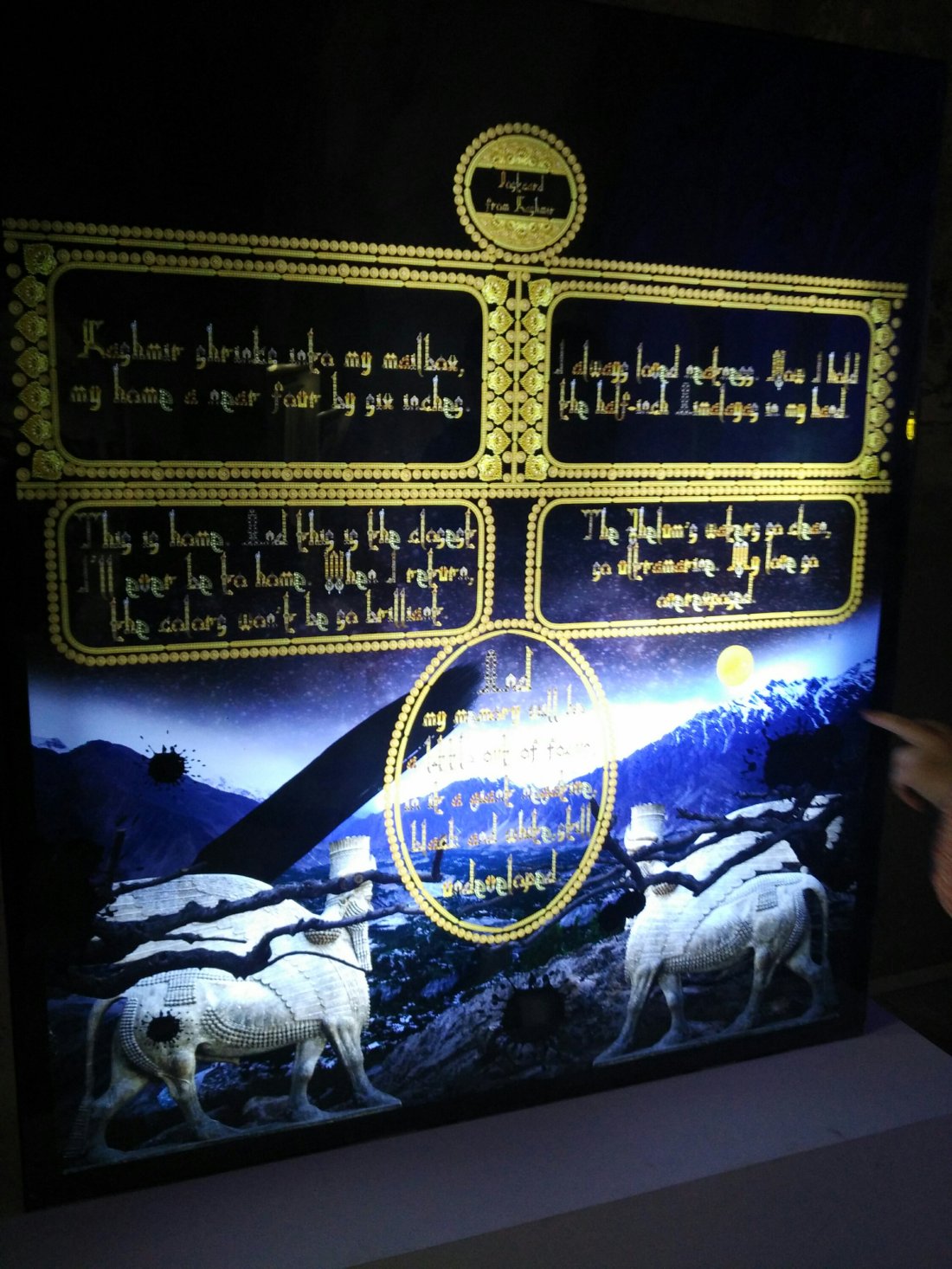 A bit of poetry in English. 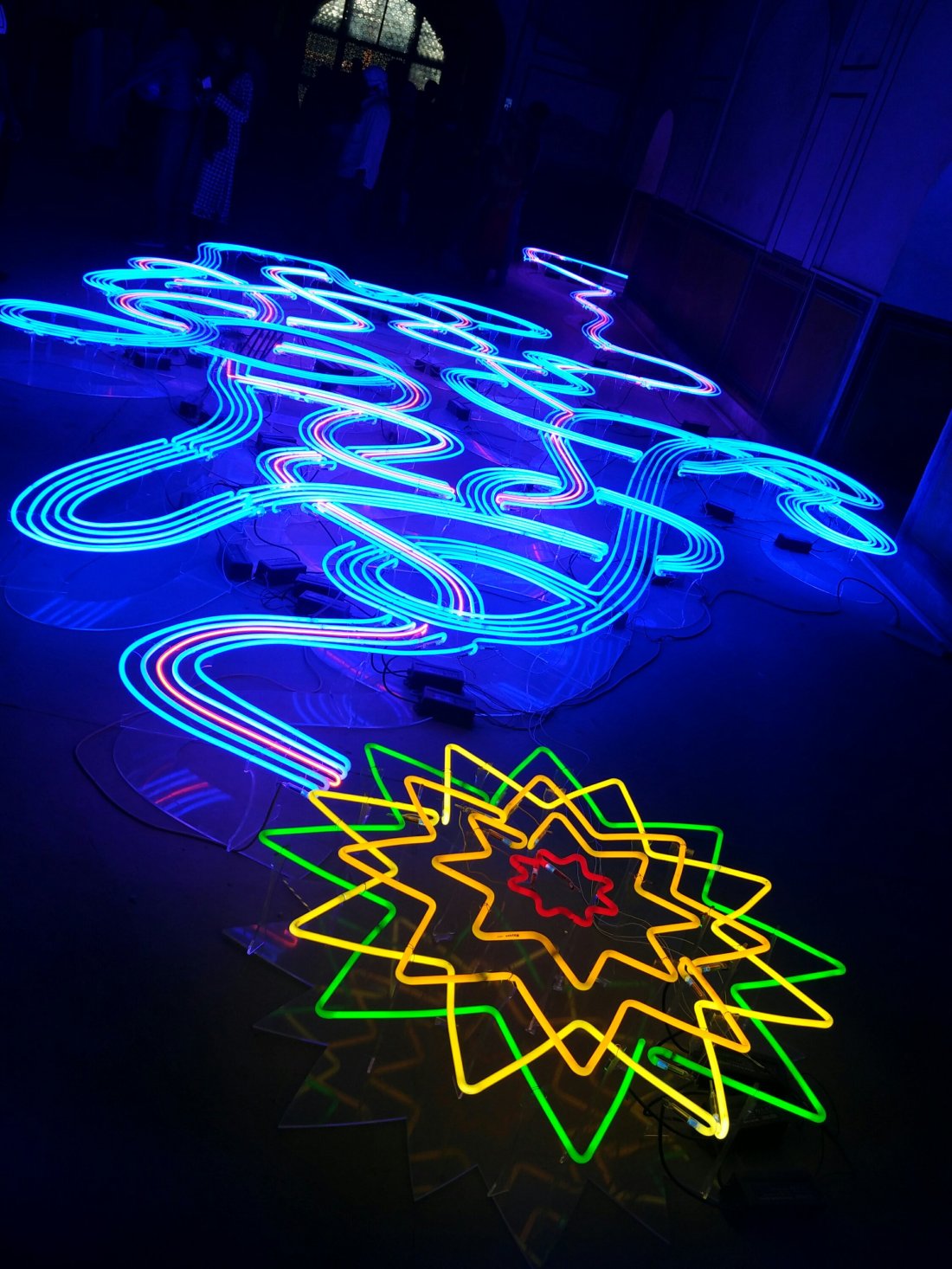 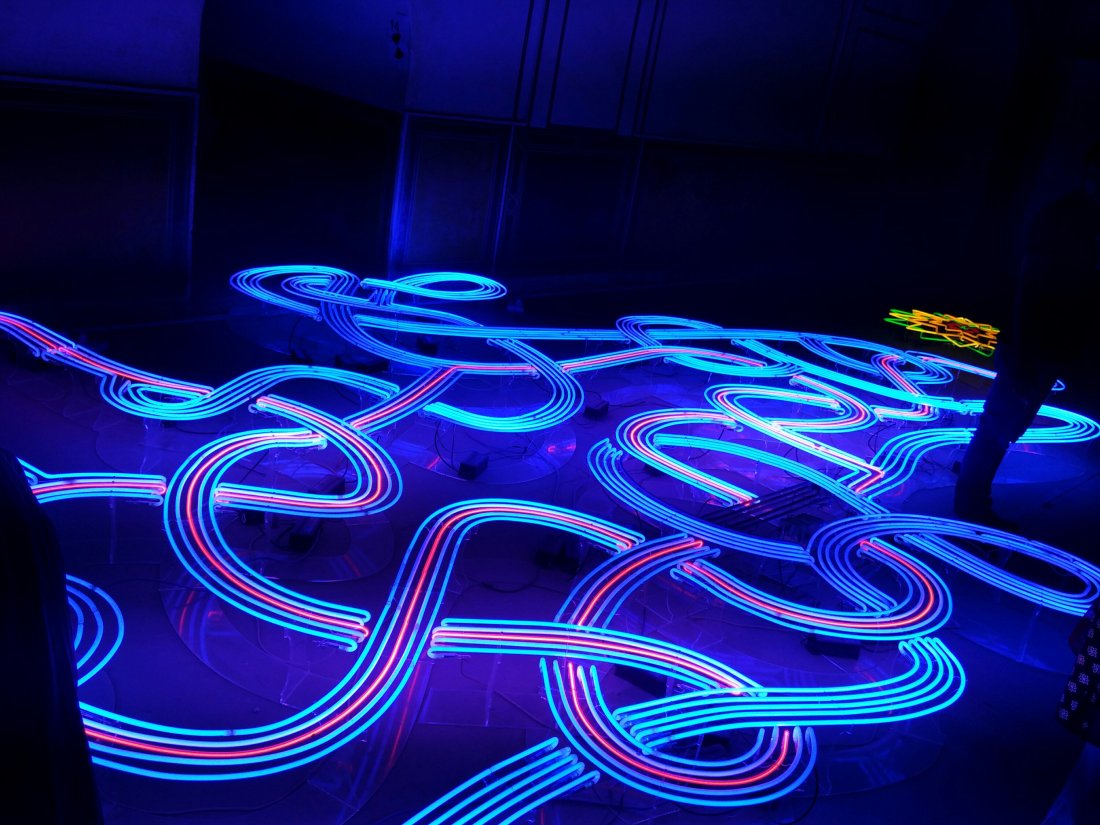 Above and below are two verses from a poem “Silsila e Roz o Shab” by a renowned poet, Allama Mohammad Iqbal”

“The succession of day and night, is the architect of events” 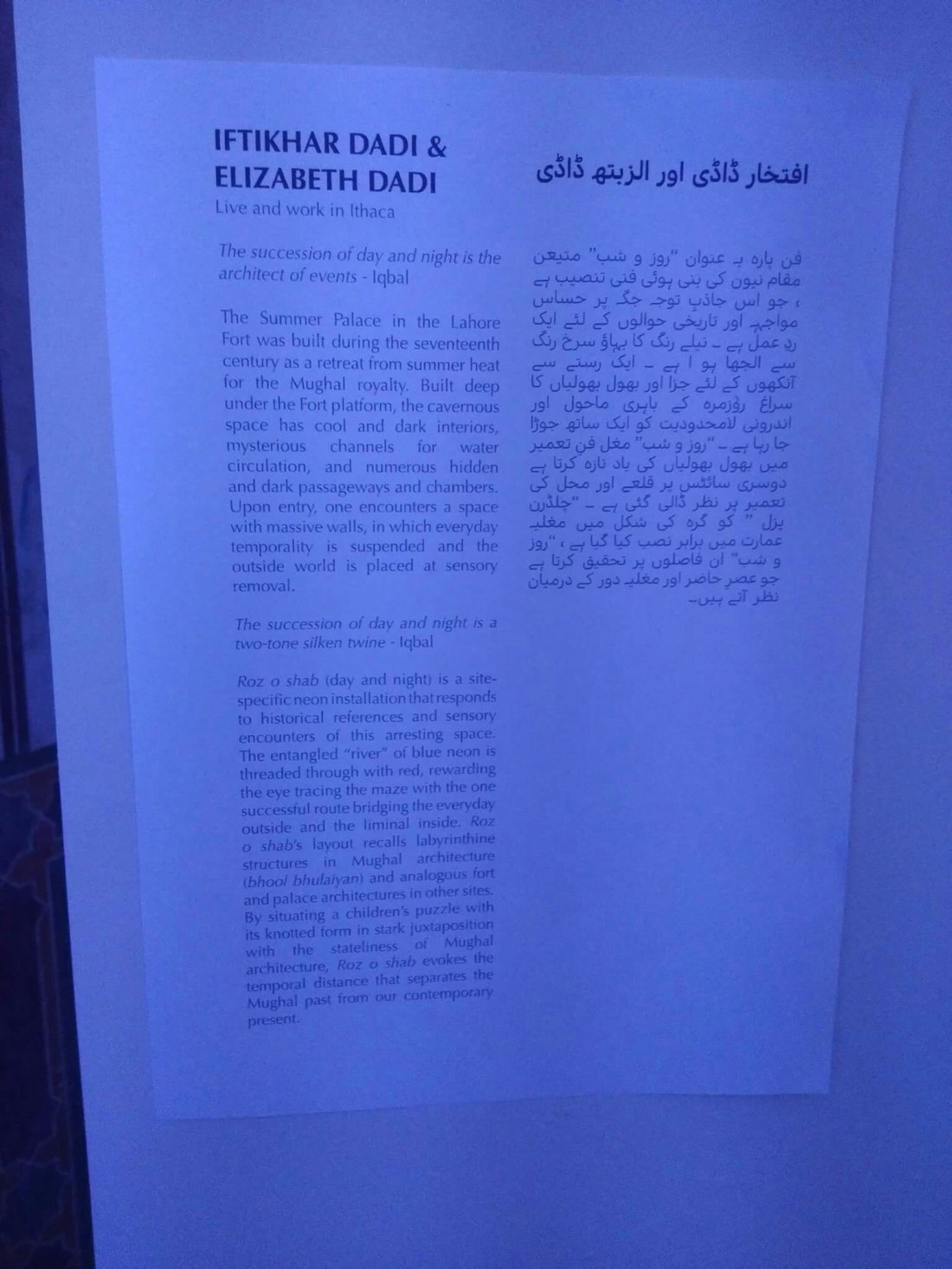 Above is a brief but comprehensive description of the above neon lights design.

Ok, these three videos were the ones I really thought about and pondered upon when I left the exhibition. For those who may not understand, these people are Iranian. In the first two videos, An Iranian man is singing a Farsi song of Rumi in a very deep, soulful and beautiful voice. I don’t know Farsi but it did stir something in me like listening to beautiful Arabic recitation does. But if you notice here. the man is facing his back towards the audience and you can see the audience. After he is done, he is given an applause.

There were two screens present, facing each other and a sitting area between them where viewers observe both the screens. At one screen, the man sung, Then the scene shifted to the other screen of a person in black veil who starts singing. The audience and the man are observing the person with awe. The woman with awe.

The woman actually doesn’t seem to be singing but making strange and harsh noises. I kept thinking how weird it was and that art and singing are just plain difficult to understand. It was very creepy watching her and listening to her. But the important thing was that she was facing the audience, which was rows and rows of empty seats. There was no music, and I’m not sure she was singing Farsi. But after she was done, the moments of silence that followed was more than enough to tell what happened. Facing a silent audience, she had a silent applause louder than any other which is clear from the other audience and man’s shocked expression. She bypassed every rule of traditional music and presented a style of her own, whereas the male singer remained within the perimeter of convention, according to the description.

This shows the gender discrimination women face in Iran, that they have to be veiled, cannot go out alone, are banned from practicing activities such as singing, etc. So here, the women is expressing her every possible emotion in every possible way to be heard. To be finally heard. The woman has to face the audience and scream at the top of her lungs to be heard, whereas the man didn’t even face the audience and he received an applause, showing that he didn’t have to fight to be heard; people already hear what men say.

This video was titled “Turbulent”, which is the work of Shirin Neshat. The vocal male singer was Shahram Nazeri, who was lip synched by Shoja Azari. The woman was played by Susan Deyhim.

Above, the artist wanted to express that the Holy Kaa’bah was covered in black. Since black absorbed all the colours and wavelengths of light and emitted nothing, black is actually composed of all the colours that are absorbed to give this dark colour that gives no indication of any other colour. It is a misprint to reveal many hidden colours; cyan, magenta and yellow.

The below description will help explain this more accurately: 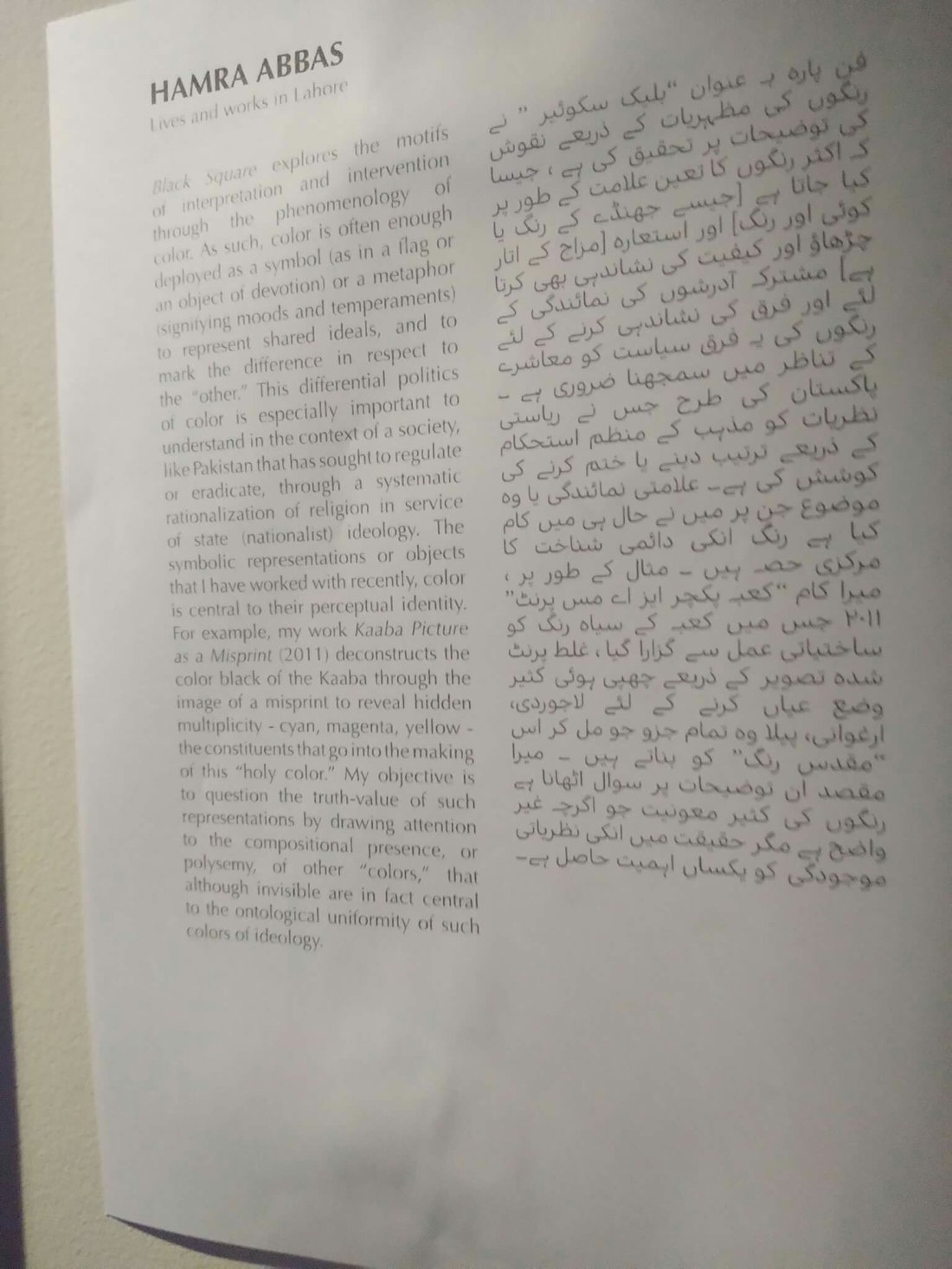 So overall, it was a wonderful experience and perhaps worth sacrificing my preparation for Mocks 😛

Art is an expression of deepest feelings that people should appreciate and listen to, because some things cannot be said in mere words. You need to here their non-verbal communication from different angles.

Sometimes, a description of a work of art is not necessary. People should infer what they can from it, as long as it enlightens them, the objective is achieved. It’s a lot of work; even I don’t sometimes understand what the artist is trying to say but I make an effort to not fear or judge things I do not understand and try to understand it. Because that’s what everyone wants; to be heard and to be understood. This should be taught in every school, in every workplace everywhere along with their studies. Once everyone makes that effort, the world will be a much more beautiful and safe place to live in, Inshallah.